Barre's Boy Scout Club operated under British Charter in the Summer of 1909
The 1st Official BSA-YMCA Scout Camp was at Camp Abnaki from July 1-20, 1910
Vermont Had the First Official BSA Camp A Full Month Before New York's
Lake George-SilverBay which came later in mid August, 1910

A Brief History of How Scouting Began in Vermont & America

William (Billy) Foster Milne,  Became America's First Boy Scout upon moving to Barre, Vermont, USA .
He had been involved in the fledgling scouting movement in his native Scotland and noticed this movement was not yet started in the United States.
Shortly after his arrival in Barre he became a member of the First Baptist Church on Washington Street.
As time went on he became the Secretary of the Sunday School Association there.
He met and became friends with one of the Sunday School teachers by the name of James Grearson, who had members of his class enrolled in an organization called the "Boys Brigade". Billy asked Mr. Grearson if he could provide a better alternative program than simply doing marching and drills. In 1940, Grearson recalled this event in a letter in the Vermont Historical Society:
"December 26, 1940
It is with some degree of pleasure and satisfaction that I state my connection to the work of organizing the first Boy Scout Troop in America.
I was at the time, and still am, a member of the First Baptist Church of Barre. Among other activities in the church, I was a teacher of a fine class of boys. It was from this class of boys that membership in the first boy scout troop was made up.
I well remember the night, in the late Summer of 1909, when my good friend, "Billy" Milne (as we called him) asked if I would not like to have him help with the boy's class. I gladly accepted his offer and it was then he told me about an organization for boys in the old country.
We continued working with the boys while waiting for materials which "Billy" had sent to Scotland for.
You already know the rest of the story, not only the beginning, but the accomplishments of this wonderful organization throughout the world.
James W. Grearson" 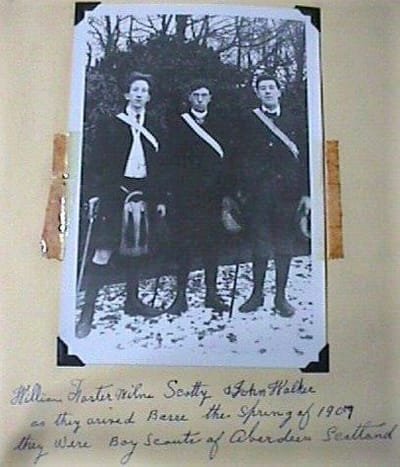 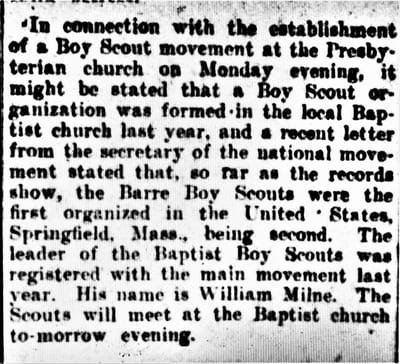 THE BOY SCOUTS OF AMERICA (BSA) INCORPORATES
Although the Boy Scouts of America became incorporated on February 8, 1910 they had no members or leaders, just a legal right to the name and trademarks.  Nothing was being done to build and grow a formal scouting organization
ENTER THE YMCA AND THE YMCA SUMMER CAMPS
Edgar M. Robinson, was an executive with the YMCA (Young Men's Christian Association) holding the position of Secretary of the YMCA's International Committee, which governed all the YMCA branches located in Canada and the United States.  His office was located in New York City
In 1909 the YMCA had 400 summer camps which offered camping programs to 15,000 boys and as there had been a great interest in adding scouting programs from many of these camp leaders.  Robinson planned on adding such programs until he found out in the spring of,1910 that a Chicago publisher, William Boyce already had the legal rights to the future of the scouting movement in America.
YMCA's ROBINSON MEETS WITH PUBLISHER BOYCE IN CHICAGO
Arrangements were made for E. M. Robinson and W. D. Boyce to meet in Chicago in the Boyce Building in May, 1910.
At this meeting, Robinson laid out his plans to build and grow the Boyce BSA organization at the up and coming 1910 YMCA summer camps in North America with a financial support commitment from Boyce. He agreed and presented Robinson a check to get things started. He pledged to donate $1000.00 a month as support to maintain the new organization.
BSA OFFICES OPEN ON JUNE 1, 1910 IN NEW YORK
Upon returning to New York, Robinson recruited a small staff to set up an office in the YMCA Building on East 28th Street.
The first organizational meeting to take the program to the YMCA camps occurred in New York on June 15th. At this meeting the YMCA camp directors and executives attending were provided with programs for adding "scouting work" into their 1910 summer programs.
YMCA CAMP ABNAKI July 1-20, 1910, NORTH HERO, VERMONT
One of these charter member BSA attendee's was the Vermont State YMCA Secretary, Byron N. Clark who founded the YMCA Camp Abnaki in Vermont in 1901.
B. N. Clark besides being state secretary and camp director, was also very involved in the Burlington, Vermont community. Because of his leadership abilities he was chosen to become the first Vermont State Scout Commissioner.
CAMP ABNAKI, VT vs. SILVER BAY, NY
The First BSA Scout Camp in America was not Silver Bay at Lake George, New York
The YMCA-BSA Camp Abnaki, at North Hero Vermont, opened first for their summer program on July 1, 1910.
To add new programs of scout work to Camp Abnaki Director and Vermont State BSA Commissioner Clark would enlist the help of Barre's, William Foster Milne, who already had been growing scouting in Central Vermont.
It was at this camp in July, 1910 where the Barre, Vermont boys of Troop 1 and W. F. Milne signed onto the new BSA program, making Barre, Vermont's Troop 1 the official First Boy Scouts of America (BSA) Troop.
(See above article from "The Barre Daily Times", 11/09/1910 page 5)
Silver Bay, on Lake George, NY opened with their scout work on August 18, 1910, a month later than the YMCA program at Camp Abnaki, VT.

BSA Document from 1935 Trying to Reconstruct Early History before 1911

June 21, 1910 Meeting with Seton Thompson and other leaders about merging their groups into the BSA. There still were no official member troops in the BSA until July 1, 1910.

The BSA has no documentation in their archives prior to January, 1911

The BSA could not determine with certainty which was the very first Troop to join the Boy Scouts of America (BSA). However they felt it most likely that Springfield, Massachusetts was first. The BSA did not have the newspaper document to the right from page 5 of the November 9, 1910 "Barre Daily Times". That article states that the Secretary of the BSA said, Barre, Vermont was first, and Springfield, Massachusetts was second.

According to the Secretary of the Boy Scouts of America, Troop 1 of Barre Vermont was First and Springfield, Massachusetts was second.

I BUILT MY SITE FOR FREE USING